Myths and Illusions No.3

the volts may jolt – but it’s the mills that kill! 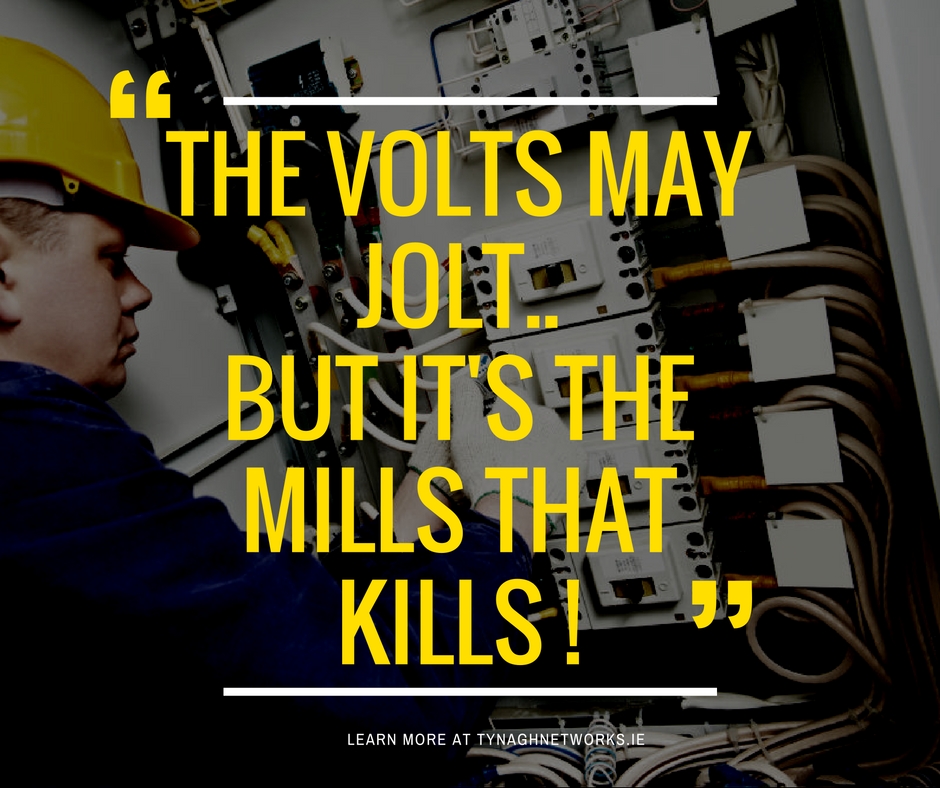 CAN YOU EXPLAIN THE LOGIC OR SCIENCE SUPPORTING THIS PRACTICE?

It is accepted worldwide that it is not the amount of voltage, but the amount of current, that poses a threat to human life.  For example; an electric fence may have up to 9,000 volts but, will not kill a human or an animal because its current is limited to less than  5 milliamps.  On the other hand, voltages of less than 120 volts have caused electrocution when current levels exceed 300milliamps.  Once dangerous current levels are reached, it doesn’t matter whether the voltage is 120 volts or 120,000 volts.

To provide worker protection, a safety device must take the full fault current and remain intact until the breaker trips. (Safety Standard IS EN 61230: 2008)   Safety procedures in Ireland are based on the notion that 25sq mm copper conductor will protect a worker from the danger of 36,000 Amp. fault current, but it takes 95 sq. mm conductor to protect from the danger of 6,675 Amp. fault current.  This practice contradicts all known electrical science and is not practiced anywhere in the world, with the exception of Ireland.

6,675 Amps. Approx. (The largest HV transformer currently in use in Ireland).

Note: We use 95sq mm conductor for protection from this threat.

The fault current from a 1 Mva, 400V output, 4% impedance, transformer is

36,000 Amps. Approx. (The largest LV transformer currently in use in Ireland).

Note: We use 25sq mm conductor for protection from this much greater threat.

In line with the rest of the world, Tynagh Networks is of the view that this safety procedure cannot protect workers on LV networks in Ireland.

If you think we are wrong and can prove it, you have earned yourself or your nominated charity €10,000.  In addition, the same offer applies to anybody who can prove that 25sq mm. copper conductor offers any worker protection whatsoever from the possible fault levels of Ireland’s LV networks.

This website uses cookies to improve your experience while you navigate through the website. Out of these, the cookies that are categorized as necessary are stored on your browser as they are essential for the working of basic functionalities of the website. We also use third-party cookies that help us analyze and understand how you use this website. These cookies will be stored in your browser only with your consent. You also have the option to opt-out of these cookies. But opting out of some of these cookies may affect your browsing experience.
Necessary Always Enabled
Necessary cookies are absolutely essential for the website to function properly. This category only includes cookies that ensures basic functionalities and security features of the website. These cookies do not store any personal information.
Non-necessary
Any cookies that may not be particularly necessary for the website to function and is used specifically to collect user personal data via analytics, ads, other embedded contents are termed as non-necessary cookies. It is mandatory to procure user consent prior to running these cookies on your website.
SAVE & ACCEPT
Call Now Button Positive SSL